Original Pattern by Lion Brand – linked at the end of the interview.

My heart grew to follow Johnny as I knew he was fully committed to his craft. Watching him grow as an artist through Instagram is a delight. I’m intrigued by what he has accomplished in a short amount of time and he is gives off a very positive vibe. Since I wanted to know more about him, I asked him if I could interview him. 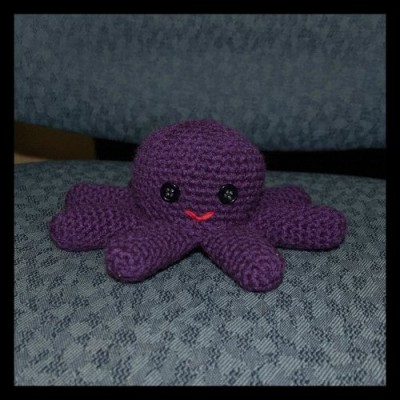 Johnny, what do you recall as your first piece of artwork?

‘I used to draw a lot when I was younger. I would draw anything. I’d sometimes stare out my window and draw my neighbors house. I remember in middle school we had a contest going on in my art class. We had to draw an animal in its habitat. I drew a snake in the rainforest. 2 weeks later, they announced the winners, and I won 1st place. I was so excited! Excited because something I worked hard on was admired.’

Who are the artists in your family and what is/was their art form?

‘When my mom was younger she used to draw. Her absolute favorite thing to draw were unicorns. When I started drawing, I got my little brother into it as well. Instead of doing our homework, we would sit at the table and draw.years later, my brother who is now 18, still draws, and is really good at it. As for myself, I can’t draw anymore. haha’

What inspired you to try crochet?

‘About 2 years ago, I was at the computer one day, looking up octopus plushies. I came across one that was so awesome. It was crocheted, [and] it even had a pattern to it. I had done a bit of crocheting when I was in high school. I only knew how to make scarves. I was DETERMINED to make this awesome octopus. So I went to the store, bought material, and I got to it.’

How and when did you learn to crochet?

‘I started when I was a junior in high school, but I only knew how to make scarves. Seeing the octopus, I had NO idea when the terms meant, so I went to the library and checked out books. I still had no idea what the terms were saying. So I went onto YouTube and looked at so many videos on how to crochet. It took me a long time, but in the end it was worth it.’

What was the first piece you ever made and do you still have it?

‘The first piece was the Octopus. I was so happy and excited that I made something so UGLY! haha. I didn’t do a bad job for my first time, but I knew I could do better. I wish I still had it to remind me where I started in crochet, but sadly my friend’s dog got to it.’

At what point did you realize you were ready to start selling your pieces?

‘I was selling to my friends about 2 weeks after making the octopus. They loved my worked. It wasn’t till much later when I was crocheting a dinosaur that a lot of people kept telling me to sell them online. I wasn’t sure if I could even sell anything. I was scared people weren’t going to like my work as much as my friends, but I did it anyways. I opened up an Etsy and listed a few of my items.’

What other art forms do you practice or enjoy?

‘I draw once in a blue moon, not as much as I used to. I’m not as good anymore. It’s just a bunch of doodles that I do. I love graphic art. I used to do a lot of it on photoshop. It was so much fun, doing something different. Instead of using a pencil, I was using a mouse to draw.’

Do you dream about crocheting?

‘I’ve dreamt of crochet so many times. Most of it is meeting a deadline to get something done. haha’

Have you taught anyone to crochet?

‘I tried teaching my friend to crochet. That didn’t last. I’m not a very good teacher. haha’

Where do you see your art leading you?

‘When I started, I had no intention to sell. It was to simply have fun making things I never knew I could.

I’m glad people are loving my creations. I just want to continue to inspire people to crochet, just like many others have done for me.’

You may find Johnny on Facebook on Etsy or on Tumblr.

The original pattern source of Amigurumi Octopus pattern is Lion Brand and can be found by clicking HERE.